Police and Fire Department at the SG School

At 10:47 a.m. the Sea Girt Police Department and the Sea Girt Fire Department were dispatched to the Sea Girt Elementary School on Bell Place.  Police communications recieved a call from an automatic alarm company reporting an activation of the school’s fire alarm.

As the police and firefighters arrived, they were met by Stephen V. LaValva, Chief School Administration, who advised us there is a smoke condition in the kitchen due to an insulated bag, used to carry lunches, being placed on an electric range top.  The bag was quickly removed from the stove top and douced with water, but not before burning and creating a smoke condition in the school and a strong odor.

All staff and students were quickly evacuated from the school.  At no time were any of the students in any danger due to this incident.

Students in grade four through eight were allowed to reenter the school by 10:50 a.m. as their classrooms were not effected by the smoke or odor created by the incident. 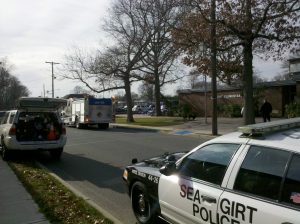 Police and Fire Department repond to the SG School

The student from pre-kindergarten to third grade were escorted to the gymnasium while the Fire Department evacuated the smoke and odor with large exhaust fans.

By 10:50 a.m. the school was able to return to normal operations.

Lt. James Kremp and Patrolman John DeMillio responded from the Police Department as well as members of the Sea Girt Fire Department, which was under the command of Chief Tim Harmon.