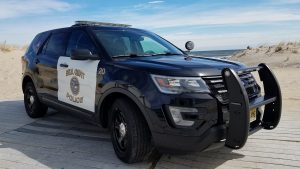 Officers of the Sea Girt Police Department are most often seen acting in the patrol capacity.  It is the most utilized component of our police department.  The term “patrol” might be a little misleading as it actually encompass much more than just driving around the street, it is a much more generalized term.  Officers assigned to patrol will participate in a wide variety of activities during their shift.

Officers are assigned to patrol 24 hours a day, 7 days a week.   Some of the general duties an officer may perform during their patrol shift include:

The Sea Girt Police Department utilized several methods of providing the patrol services to our community.  The most often seen method is through one of our marked patrol vehicles.   We also deploy officers on bicycle and on foot to target areas where quality of life offenses are most prevalent.

Our patrol officers are assigned to one of two / 12 hour shifts:

Some officers may be work other, overlapping, shifts as needed and during special events.