The Borough of Sea Girt, as a municipality dates back to 1917.  Prior to 1917 Sea Girt was part of Wall Township, as was most of the area towns.  As a community, Sea Girt dates back to around 1875.  At this time a group of Philadelphia land developers purchased two farms between Stockton Lake and Wreck Pond. 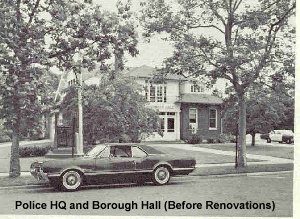 In Sea Girt’s early years its inhabitants were mostly summer time vacationers.  As the area around Sea Girt developed people took advantage of the shore and began to stay throughout the year.

In 1917 the Sea Girt residents took action and formed their own municipality.  This one square mile area still includes the area between Stockton Lake and Wreck Pond.  The only area in town which has not been developed is the National Guard Camp and State Police Academy which is located in the southernmost area of the town.

Once the Borough of Sea Girt was officially established a hall was needed to administer the borough’s affairs.  The site which the new town council chose to place the new town hall was on the northeast corner of Fourth Avenue and Baltimore Boulevard.  This is still the site of the Borough Hall.

The Sea Girt Police Department was not immediately organized.  Police protection was handled by Charles W. Roberts who was appointed as town Marshal.  Mr. Roberts was also the Borough Superintendent.  He served the Borough conducting both jobs until his death in 1937.

In 1921 the Borough Council appointed the first police officer.  He was the official “watchman” of Sea Girt.  He earned a salary of $100.00 per month. 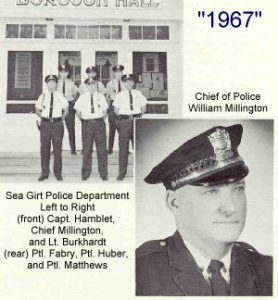 By 1967 the Sea Girt Police Department grew into a 13 man department.  Keeping up with the needs of the Borough of Sea Girt, the Police Department held six full time police officers, a few police dispatchers, along with special officers.

In later years Hugh W. Hamblet took charge of the Sea Girt Police Department.  He held this position until his retirement.  After Chief Hamblet’s retirement, William W. Joule was appointed as the Chief of Police for the Borough.  July of 2005 saw a new change in the leadership of the Police Department.  Chief Joule retired after 37 years of service to the Borough of Sea Girt and Edward J. Sidley Jr. was appointed the newest Chief of Police.

Somewhere about mid 1980’s the Borough Hall was renovated.  An addition was added to the east side of the building which is currently used to house the police department.  This addition added much needed office space, records room, dispatch area, processing area, holding cells, and a locker room.

The first two-way radio system in place for the police department gave the Sea Girt Police a great advantage over the Gamewell Signal System.  Originally Sea Girt Police shared its radio system with Point Pleasant Beach PD, Manasquan PD, and Brielle PD.  Each of these towns also used this channel for their fire departments, there first aid squads, and their public works.  Later, the Sea Girt, Manasquan, and Brielle police departments acquired a separate channel for the police communication.  In 1989 Sea Girt Police Department received their own police radio frequency from the FCC and began using their county assigned radio identification.

The police department you see here in these web pages represents our current organization.