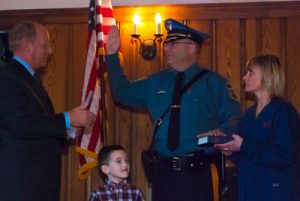 Swearing in of Chief Conway

The Sea Girt Fire House was filled with friends, family, coworkers, and officials from the Borough as Chief Conway was officially sworn in as Chief of the Department.  Mayor Mark Clemmensen administered his oath of office while Chief Conway was flanked by his wife and grandson.  Upon the conclusion of his oath of office, the badge signifying his new position, was placed upon his chest by his wife.

Chief Conway has been a fixture in the Borough of Sea Girt for his entire life.  Born in 1965, Chief Conway summered at his family’s Sea Girt home until moving here full time in 1980.  It was that year, at age 15, Chief Conway began his employment with the Borough of Sea Girt as a member of the Beach Maintenance crew.  In 1983 he became a Special Officer with the Borough’s Police Department.  In October of 1985 was hired as a Patrolman in the Police Department.  Chief Conway was promoted to the rank of Corporal in January of 1991, Sergeant in December of 1991, Lieutenant in August of 1997, and Captain in October of 2005. 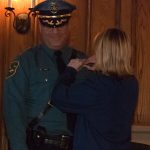 Badge Pinned on New Chief by his Wife

Robert is currently married and has three children and two grandchildren.

The Police Department, under Chief Conway’s command will continue to full fill its mission to maintain peace and order through high quality, responsive, and professional police services.  Chief Conway is dedicated to continuing the process of gaining New Jersey Law Enforcement Accreditation.  Accreditation has long been recognized as a means of maintaining the highest standards of professionalism in law enforcement.  The Sea Girt Police Department is currently in Phase II of the State Accreditation process.  The department is currently undergoing a self-assessment of our practices and directives to ensure we meet applicable standards and develop the proofs to show assessors that we are in compliance with these standards.  Chief Conway feels it is important for the community to know that we conform to the best practices in law enforcement and they are receiving police services that are of the highest level of professionalism and therefore he will continue the process which began with his predecessor of achieving this state accreditation.

Members of the Sea Girt Police Department congratulate their new leader and look forward to working closely with him in the future.