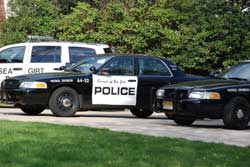 Sea Girt Mayor Mark Clemmensen has announced that the police department will implement the new Street Smart is Street Safe program to protect the safety of school children and school crossing guards.

According to Police Chief Edward Sidley Jr., the reasons for the high frequency of accidents involving school children and school crossing guards statewide include:

The program, which features a new training video for school crossing guards, was produced by the Municipal Excess Liability Joint Insurance Fund [MEL] and the New Jersey Association of Chiefs of Police.
Chief Sidley requests that any person seeing an incident of unsafe driving, including double parking, or unsafe conditions, such as blocking the view of a crossing guard, should notify the police department at 732-449-7300 as soon as it is practical.

The committee will consist of a member of the governing body, a member of the board of education, Borough Administrator Alan Bunting, Chief Sidley, Superintendent of Public Works Kevin Thompson, Borough Engineer Peter Avakian and a number of civilian volunteers. Citizens wishing to participate should call Mr.  Bunting at 732-449-9433 ext. 44.